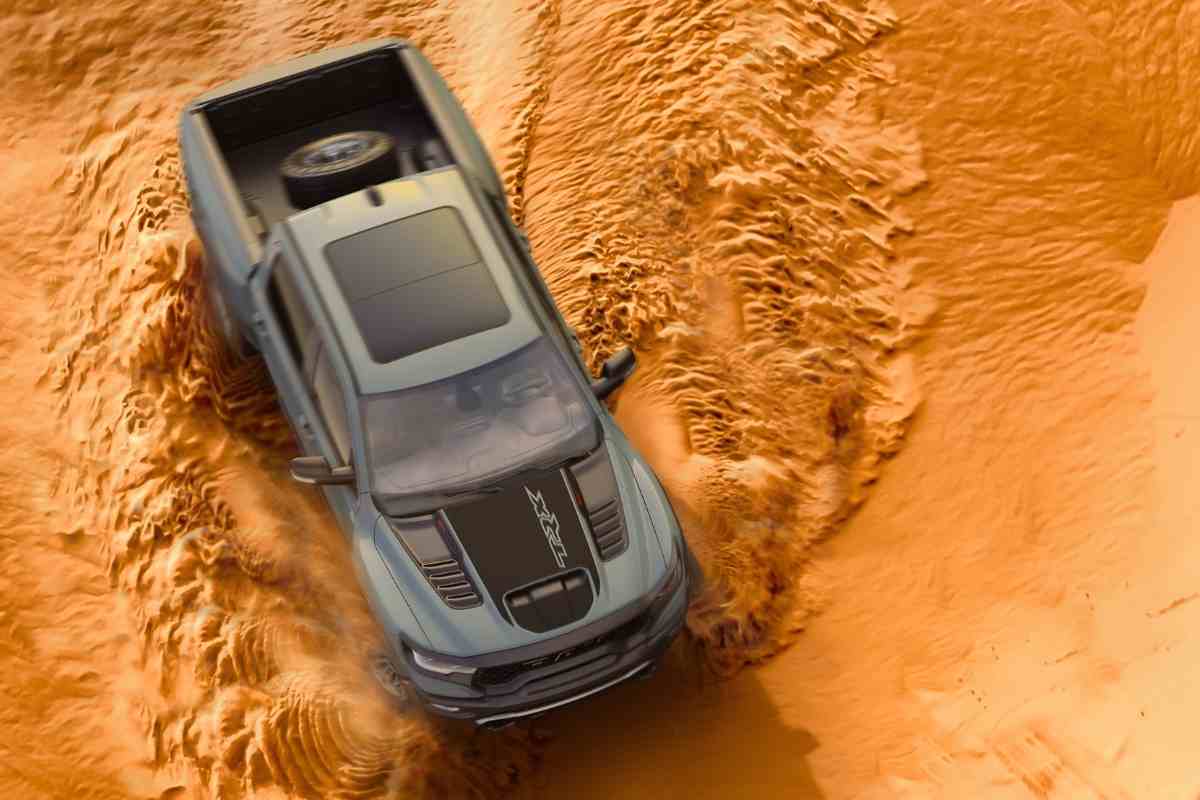 If you are feeling a little power-hungry and in the market for a new truck, you may be wondering which truck has the most horsepower. While this is a bit of a trick question, we will discuss the most powerful mass-produced truck, the most powerful special edition, and lots of other powerhouses before them.

There are currently two extremely powerful trucks on the market that are competing for your dollars if you want the toughest truck on the planet. You can either purchase the widely available 2021 Ram 1500 TRX or the limited production 2020 Shelby Ford F-150 Super Snake.

There are lots of fast trucks out there these days, not just from the factory but also inventions that are being built in the garages of tuners. Of course, they even have trucks powered by rockets that may not qualify as a truck anymore. Let’s just find out a little more about the two aforementioned leaders as we also look back in history and examine the tender roots of tough guy trucks.

The Most Powerful Trucks in the World

While the 2021 Ram 1500 TRX is touting itself as the most powerful truck in the world and saturating the media, the company is careful to limit the implied status of its vehicle. Shelby is even more precautious in their press releases by only touting the 2020 Shelby Ford F-150 Super Snake as the fastest street-legal Ford ever produced.

The difference between these two heavy hitters is 68 ponies and a 1.05-second gap in their 0-60 times. The Ram is fitted with a supercharged to maximize airflow but is still in the dust behind the Super Snake’s supercharged 5.0L Coyote V8. That certainly warrants a tip of the hat for ol’ Shelby and the boys, taking tuning to the next level.

The entire concept of competing for the most powerful truck title is so masculine and drips testosterone from the mud flaps. These vehicles have literally transformed into those alien robot transformers from their humble roots as mechanical bulls.

Apparently, the drive to build the strongest and fastest truck has its real roots in the tractor pull contests from those corny American fairs. Whatever the drive may be, Americans love muscle cars and just can’t stop hollering about tough guy trucks.

There may be a genuine need for speed and power if the mundane work we did was loading up 10-ton teddy bears and racing them around a track to fill up a giant mechanical claw machine all day.

But since work trucks are relatively flat and economical units that few are willing to shell out $93,385 per unit, these vehicles conceptualize the American ego more than they are practical.

Nevertheless, anyone can see the potential for excitement and loads of photo ops in a vehicle that looks as fast as it performs and costs more than a house.

When we look back before these super trucks, we may have considered a fast truck to have 400 horses or less. The marvels of engineering that are being manufactured nowadays are wonderful but sadly outside the budget of your average truck enthusiast.

This is why I think the modest $69,995 price tag on a Dodge Ram 1500 TRX is a step in the right direction. Although, you know what they say, you only get what you pay for, and perhaps more than you can afford if sports trucking isn’t your primary goal in life.

But hey, just think of the opportunities. You’d be practically guaranteed a trophy if you show up in any one of these trucks at a truck show. And you could always resell it for a higher price if you get a genuine collector’s edition, like the Shelby Super Snake.

In this mode of thinking, any mature individual with a good credit line and an education can afford to tickle his feet on the pedals of one of these super trucks. Let’s consider some detailed features of these monsters below.

That is an amazing amount of pedal power that is sure to throw anyone back in their seat. I haven’t all the specs on it, but I would imagine that it has special racing tires. I have long known that keeping the rubber on the ground with that kind of power has always been an issue with supercars.

In any regard, the Coyote engine was originally designed to compete with the 6.2L LS3 engines fitted in the Camaro. The Mustang GT was the first conception of the Coyote put into production. Ford engineered this monster engine with independent, twin variable cam timing.

This tweaks the air intake and exhaust flow with such precision that it reduces emissions and improves fuel economy while still allowing the engine to output tremendous power with natural aspiration or the supercharger, 0-60 in as little as 3.45 seconds.

And of course, the Super Snake mates this powerhouse to their latest super-project, the 10-speed transmission that they developed in partnership with their friend and competitor, GM. This 10-speed transmission is quite a marvel itself and boasts of over one million lines of coding to finetune its application and account for every change in load, altitude, range, RPM, and shift.

With only 250 of these Shelby Super Snakes produced, you know that the out-the-door price is already well over $100,000. Dealerships just love to get their hands on these to set them up as golden ticket prizes for the locals to get into a bidding war over.

The Ram TRX is more of an off-road vehicle than the Super Snake. It has an incredible list of features that I can’t even discuss at length because its over the top.

One of the cool features is the launch control that allows you to drag race this monster. Launch control is specifically designed for the sports trucking trend. You can take this truck out in the desert and just let the world roll by.

The 6.2-liter supercharged HEMI® V-8 engine takes 2.5 seconds longer to reach 100 mph than the Super Snake. It has extremely high torque, 650 lb.ft., but will only take the trip on eight gears with its TorqueFlite 8HP95 eight-speed automatic transmission. As the name implies, this tranny is designed to handle lots of low-end twisting and pressure.

The Ram is heavier than the Super Snake, which you would expect because Rams are usually a lot heavier than snakes in the wilderness. Of course, we are talking about a super snake here, something in the size range of a reticulated python. So, the weight difference isn’t out of this world.

One outstanding feature is the dual filter for dust that boasts of being four times as effective as its next leading competitor. It is also quite a catch because it features a suite of more than 100 high-tech safety features. This isn’t some leaned down stock car built for top speed but is quite fast, nonetheless.

There are a slew of other mass-produced fast trucks that fill out the bottom. Aside from the special models that are being built by Ford and Dodge to corner the sports truck market, you have traditional Ram 1500 and 2500 models that still carry a lot of power maintaining the lead. After them, Toyota Tundra, Nissan Titan, Chevy Silverado, and more Ford F-150’s maintain supremacy.

These trucks are fast but nearly as fast as the two leading models. These normal production vehicles are lucky if they have over 500 horsepower. While 500 horses are still more than the average truck owner needs for daily chores, the sports truck segment is a special market.

The Ford F-150 Raptor is probably closer in design to the Ram TRX because it is also an off-road vehicle and is destined to debut with a 5.2L supercharged engine pushing up to 750 horsepower in its next incarnation.

That will put the Ford F-150 Raptor just behind the Super Snake in gusto and bring it up to off-road sports truck status to overtake the Ram TRX in its segment. Talk about riding the coattails of someone else’s brand development.

So, there you have it, you can make any truck the fastest in the world by simply starting with a big engine and pumping it full of air with a supercharger. It’s a shame that the Volkswagen Corrado never lasted. It was the epitome of unreliable and the reason why superchargers fell out of favor, at least in Germany.

On an end note, there are also some very fast hybrid vehicles that are being built for performance and EPA employees. Be sure to let us know what you think of these fast trucks and whether they are as green as the money behind them.