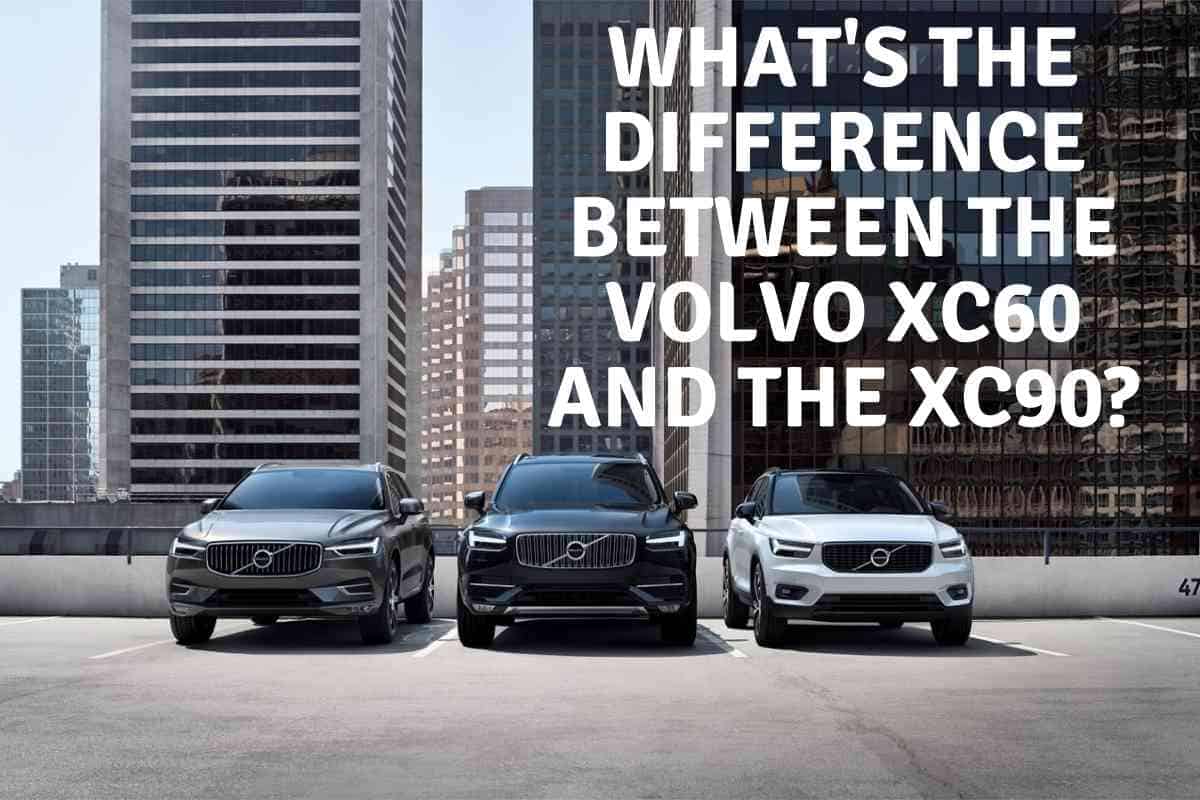 Buying a new SUV is far from being an easy task. There are many things to consider when making your final decision, and one of them will probably focus on just how much room you need for people.

That’s where the Volvo XC60 and XC90 models differ the most.

What’s the Difference Between The Volvo XC60 and The XC90?

The main differences between the Volvo XC60 and the XC90 are size and price. The XC60 is a smaller SUV that seats five people in two rows of seats while the XC90 seats seven in three rows of seats. A new XC90 is roughly $6,000 more than a new XC60.

And, yes, some of the standard features differ a little bit too.

Which one is going to work best for you? Let’s examine the differences between the XC60 and XC90 to find out.

With an SUV, you are going to want something powerful enough to haul a camper or a couple of jet skis – things that make family life fun.

Volvo has three solid options here that you can find on both vehicles.

Both start off with the T5’s turbocharged 2.0-liter four-cylinder engine capable of generating 250 horsepower and 258 lb-ft of torque.

The T6 is higher-powered, getting 316 hp and 295 lb-ft of torque from its turbocharged and supercharged version of the T5.

Want to try a hybrid model instead?

The Recharge (which used to be known as the T8) is powered by a combination of the T6 engine and a battery pack and electric motors.

This plug-in model allows you to travel up to 19 miles on pure electric energy before kicking over to gasoline usage.

There are multiple trim levels to choose from on both vehicles.

You can select from the Momentum (which, on the Recharge, is called Inscription Expression instead), R-Design, and Inscription.

The XC60 does have a separate version called the Polestar Engineered, which is essentially a higher-powered version of the Recharge as it gets 415 hp and 494 lb-ft of torque.

The XC60 is a small SUV with just two rows of seats while the XC90 – Volvo’s largest SUV, by the way – is a big third-row SUV.

That means you get differences in cargo volume.

The XC60 has 29.7 cubic feet of cargo space available with the rear seats left in place.

Folding them down maxes it out at 63.6 cubic feet.

The XC90 has just 12.6 cubic feet of cargo space behind its third row, which feels small even by third-row SUV standards.

But that is two rows of seats you have to fold down, not one.

Therefore, you will be putting a little more effort and time into opening up that cargo space for loading items.

If you do get the adaptive air suspension, you can lower these vehicles’ ride heights in order to load items more easily.

The Volvo XC60 definitely has the advantage when it comes to its pricing.

Of course, this is always going to be the case with a small SUV and a large third-row SUV.

Needless to say, size is something you are going to need to consider before you decide to buy.

If you do not truly need those two extra seats, going for the XC60 can save you quite a bit of money.

Standard Features on the XC60 vs. XC90

The XC60 and XC90 trim levels pretty much share the same standard features.

Also, the XC60 offers the Premium Package (front parking sensors, built-in navigation, and power-folding outboard rear headrests) while the XC90 does not.

And air suspension can be added on either R-Design, and the XC90 R-Design has passenger-seat memory settings up front.

The Polestar Engineered on the XC60 and XC90 Inscription can both be equipped with 21-inch wheels with summer performance tires.

The Polestar can optionally come with 22-inch wheels instead, making it even more different.

So, which of these two Volvo SUVs is the better buy?

Well, that’s really going to depend on you and your unique needs.

The XC60 certainly has the advantage when it comes to cost.

It also offers the Polestar Engineered as a higher-output alternative to the Recharge.

Its manually adjustable Öhlins dampers, large Akebono brakes, gold seatbelts, and faux suede sport seats set it apart from every other trim level on both vehicles.

The XC60 also has the drivability factor going for it more so than the XC90 does.

The XC60 is much easier to maneuver due to its smaller stature, and the bulkier XC90 takes some effort.

The XC60’s turning radius is much tighter, making turns a lot easier to wind through.

The XC90’s biggest advantage is its number of seats.

If you really need those two extra seats in the rear for chauffeuring kids around, then they do come in handy.

There is an option for second-row captain’s chairs that takes seating down to six but makes for better pass-through in the middle to the third row.

The XC90 is also slightly better when it comes to off-roading prowess.

It has 8.8 inches of ground clearance on the standard suspension and up to 9.9 inches on the adaptive air suspension.

That makes for more than enough ground clearance while traveling off of the beaten path.

Still, the XC60 is no slouch with its 8.5 inches of ground clearance.

The Volvo XC90 has the upper hand when it comes to utility while the XC60 provides most of the same performance elements and features for a fraction of the cost.

Clearly, having an extra row in a vehicle means that you will have to pay more.

If you are not in dire need of those two extra seats in the rear, then consider the Volvo XC60 as you go about trying out different SUVs.

Its agility and power are hard to deny, and it is still a utility-oriented, family-friendly vehicle.