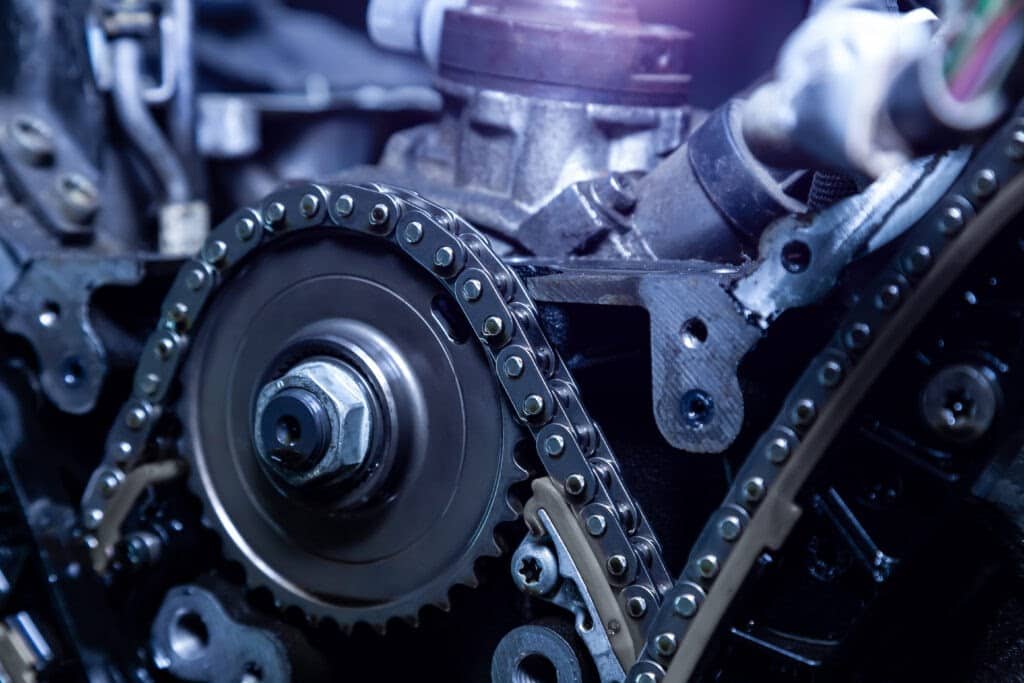 The Ford F-150 is one of the most popular, well-known, and well-loved trucks out there, and each year the truck seems to get better and better. If you are considering purchasing a Ford F-150, or you have one and are curious about its maintenance, it is important to know if it has a timing belt or a timing chain.

Ford F-150’s made after the year 2007 have a timing chain instead of a timing belt. Timing chains are more durable than timing belts, and they don’t need to be changed if they are taken care of. Older F-150’s should have the timing belt changed after 60,000-110,000 miles.

Now you know that your Ford F-150 probably has a timing chain, especially if it is a newer model. However, it is still important to understand what it does, how it works, and the difference is between a timing belt and a timing chain. Keep reading to learn more!

What Timing Belts and Chains do

Timing belts and chains are incredibly important parts of any engine system. Without a timing mechanism, the engine would not work and the car wouldn’t run.

If the timing mechanism breaks, the engine will quit, and that can lead to big (and dangerous) problems. It is important to understand how these timing mechanisms work so you can monitor the health and safety of your Ford F-150.

Timing belts and chains are the things that help the engine valves know when to open, which is an essential part of how the engine works. Here’s what happens. The timing belt or chain is what synchronizes the rotations of the crankshaft and the camshaft rotations. This connects to the valves in the engine.

When this timing is correct, the valves open with each intake and exhaust of the engine to let fuel and air in at the correct times. This helps the engine by giving it the proper conditions for combustion so it will be able to run properly.

Without the timing belt or chain, the valves would not open and close at the right times and the engine could not perform combustion. These timing mechanisms are essential; every combustion engine has one or the other so every part of the mechanism can work together.

Timing belts have been used for a lot of older models of vehicles and have been implemented since the 1960s. Timing belts made a change in how combustion engines worked and are quite different from timing chains in both their location on the engine and the material they’re made of.

They have good and bad aspects to them, but they are an important piece of a combustion engine’s system.

Timing belts are very light, which reduces any strain on the inner workings of the vehicle. They are also very quiet when the vehicle is running, which can be a great benefit for an owner who prefers a quieter car.

Being quiet also helps users know when maintenance is needed. If the engine is usually quiet, users will be able to tell when something is wrong with the engine or other parts due to the noises they make. Basically, if there is a telltale sound, a quiet engine can help you identify it.

Timing belts are rubber-based, which makes them cheaper to manufacture. However, it also leaves the belts vulnerable to wear and tear. Over time, timing belts need to be replaced because they deteriorate from oil and coolant leaks.

Timing belts are also located outside of the engine and are thus more vulnerable to cracking and drying out. If your car has a timing belt, it will need to be replaced every 60,000-110,000 miles.

First of all, timing chains are much more durable than timing belts. In fact, they do not have a replacement schedule like timing belts do because they will usually last the entire lifespan of your vehicle as long as they do not break or malfunction from some unusual circumstance. While they cost more to make, they are a better investment than timing belts in the long run.

Timing chains are located inside the engine instead of on the outside. This helps protect it even more from wearing out. They are louder than timing belts, but not by much, and they will generally blend in with normal vehicle sounds.

New timing chains have been designed to be much quieter and more reliable as well. Frequent oil changes will also prevent timing chains from wearing down.

The models of Ford F-150’s that were made after 2007 have timing chains instead of timing belts. This is because timing chains are more reliable, and the vehicle will require less maintenance as a result.

If you have an older model of Ford F-150, you should have the timing belt changed at the proper intervals to keep the engine running properly. This is at around every 60,000-110,000 miles.

Some instances tell you if you need the belt changed sooner than within those miles. If you hear a ticking sound inside the engine, you can change the oil to resolve the problem, but you should get your timing belt replaced relatively soon.

If the engine misfires frequently, then the timing chain or belt could have slipped from its place, which will throw off the engine’s timing. If there is leaking engine oil or evidence of metal shards in the oil, you should replace the timing belt because conditions like these can severely damage the belt.

Because the newer Ford F-150’s have a timing chain, you will not need to worry about replacing it unless there are unique circumstances that require a replacement.

link to Which Volvo SUV is Most Reliable?

Volvo vehicles are very popular and are considered to be luxury vehicles. The SUVs that Volvo manufactures are no exception. However, are Volvo SUVs reliable? What is the most reliable Volvo...

Continue Reading
link to What is the Difference Between Chevy Bolt and Volt?

Chevrolet vehicles are commonly associated with being gas guzzlers; however, with the Volt, Chevy made its debut in the world of electric cars. This is a move that has since evolved to include the...