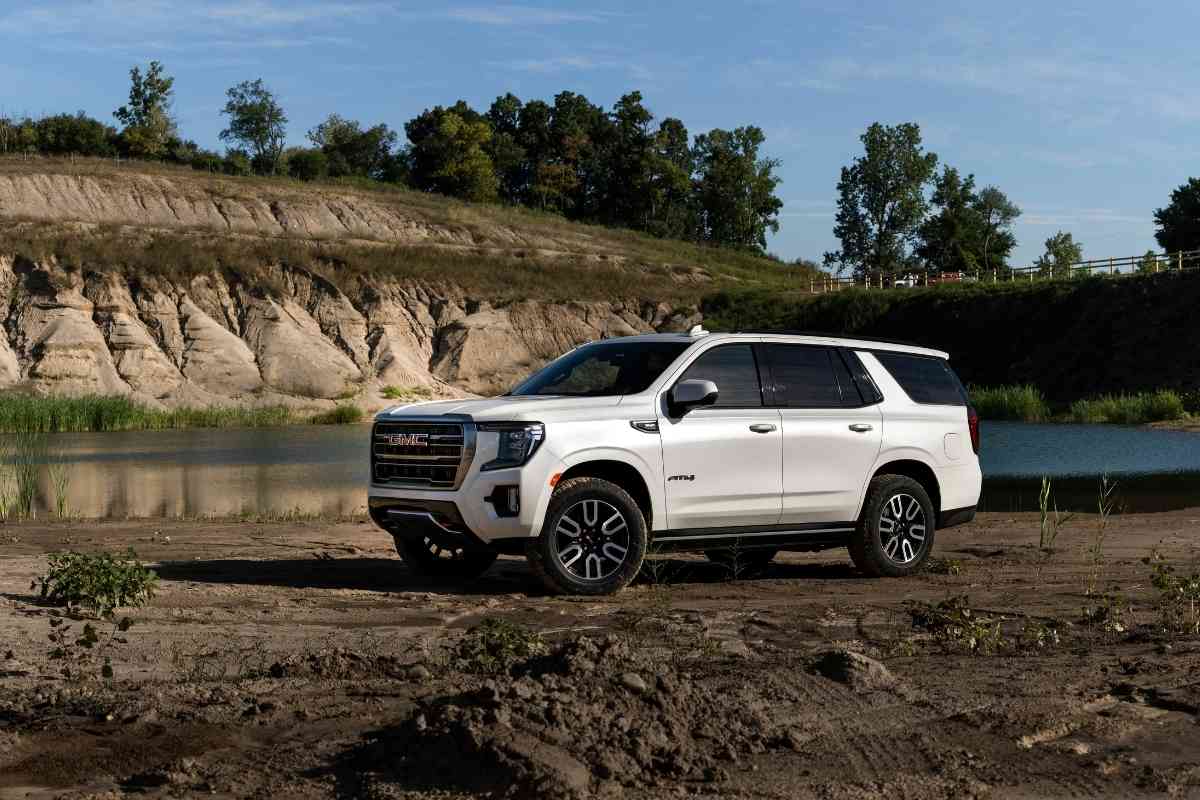 The GMC Yukon has become one of the most popular vehicles in the luxury market, thanks to its advanced features.

One significant concern with most people driving this model is whether it comes with a timing belt or chain.

I decided to find out more about this, and here is all the information that I gathered.

Since the inception of internal combustion engines, all of them have either a timing belt or chain.

Vehicles built before 1960 have a timing chain, but some modern brands feature a rubber timing belt.

The timing belts are less common than chains.

There are a few differences between the belt and chain, so read on to gain more insights.

Does The GMC Yukon Have a Timing Belt or Chain?

What Is a Timing Belt or Chain?

Both timing belt and chain play a vital role in the functionality of your car.

As the name suggests, they control your engine’s timing, like when the intake and exhaust valves open and close.

These valves must close and open at the right time.

Otherwise, the air and fuel won’t get into the combustion chamber when needed, and the operation will fail.

The timing belt and chain connect the engine’s crankshaft to the camshaft to open the valves that let fuel into the engine and drive out the exhaust.

Note that the crankshaft connects directly to the piston that powers your vehicle’s wheels, while the camshaft is the part that opens up and closes the intake and exhaust valves.

So, by connecting the camshaft with the crankshaft, the timing belt and chains synchronize the entire system for smooth operations.

Without these vital components, your car engine wouldn’t otherwise run.

Higher displacement engines have the timing chain located inside the engine.

The timing chain needs to run smoothly for the engine to perform optimally.

It has a series of links on the chain, just like those found on a bicycle.

These links move over the toothed sprockets on the crankshaft and camshaft’s ends.

On the other hand, the timing belt, located at the outside of the engine, consists of reinforced rubber. The belt uses teeth or notches on the inside part to synchronize engine valves opening and closing.

What Is the Difference Between A Timing Belt and Chain?

Overhead valve and cam engines used the timing chain to rotate the camshaft throughout the early 1980s.

From the mid-80s to the 2000s, timing belts gained vast popularity.

Though, they seemed very problematic and resulted in valve crush, which damaged the engines.

Recently, manufacturers are going back to the timing chains to prevent valve crush and premature engine failure.

Without disassembling, it can be a bit difficult to determine whether your GMC Yukon has a timing chain or belt.

But there are a few operational differences between an engine using a timing chain versus one with a belt.

The main difference between the timing belt and chain is that the belt operates quieter due to the rubber and polyurethane materials.

On the other hand, the timing chain has a longer lifespan than the belt. Due to its high strength, it can last throughout the car’s entire life.

The timing belts can’t last that long since they are rubber-based, so they degrade with time.

Note that oil and coolant leaks can increase the rate of timing belt degradation.

Also, unlike the rubber in the timing belts, the metallic chain is more temperature resistant.

The reason why some manufacturers prefer the timing belt to the chain is the price.

The belts are way much cheaper compared to the chain.

Note that since the timing chain is weighty, it results in higher fuel consumption.

So, the timing chain only works in large engine cylinders.

But, automakers have made vast improvements on the chain belts recently.

This includes the reduction of noise and vibrations and higher durability.

For decades people have always gone for the timing chains due to their durability.

Drivers demanded something quieter, so a timing belt developed.

Since the regulations call for efficiency and drivers demand efficiency, the timing chains seem relatively better.

What Are the Symptoms of a Bad Timing Belt?

Usually, the timing belt may break down when you are starting or stopping the engine since this is the time when tension is much greater on the belt.

If the timing chain breaks at low speed, it will less likely cause any damage.

But, if it comes off at high speed, it can damage everything it gets in contact with and will call for expensive repairs.

If your GMC Yukon’s timing belt or chain falls off or gets broken, the crankshaft and camshaft won’t get synchronized, so the engine won’t start.

Note that if the chain or belt breaks as you drive, they will damage the pistons, and the valves may bend as well, potentially damaging the engine.

If the belt becomes loose, it might fail and damage other parts.

So if the engine won’t run or you notice rough driving, contact a mechanic for professional inspections and repairs.

Once the timing belt or chain wears off or in case of a jumped tooth, the engine check light can illuminate.

This is because a stretched timing belt results in more emissions, which triggers the check light.

Have a mechanic scan the display warning lights to diagnose the exact cause of the problem and recommend the best cause of action.

If the timing belt or chain breaks offs, they no longer synchronize the crankshaft and camshaft.

Meaning that the valves will open and close at the wrong time resulting in incomplete combustion.

This will result in poor engine performance. You will begin to notice that the motor runs a little weird, acceleration may hesitate, and the vehicle may even stutter.

Also, as the timing chain wears off, it might stretch, causing it to skip a gear on the cam or crankshaft.

The timing chain needs inspection as soon as possible.

If you continue running the car in this state, the loose metal rolling around the motor will cause severe engine damage.

Metal Shavings on the Oil

You should change your car’s engine oil and filters as directed by the manufacturer.

With continued use, the engine oil accumulates dirt particles which can cause harmful emission and makes the engine run slower.

Once the timing chain begins to wear off, small metallic pieces can break off and get into the oil pan.

If the mechanic tells you that they found metal pieces when changing the oil, this is a sign of a worn-out timing chain.

Have a technician inspect the issue and make the necessary repairs.

A good indication that your GMC Yukon’s timing belt or chain could be failing is when the engine begins to produce weird noises.

The engine should produce a smooth and consistent sound when running at peak performance.

But, once the timing belt or chain begins to get loose, it can cause vibrations on the motor, resulting in a rattling sound, noticeable once you start your car.

When Should You Replace the Timing Belt?

You should replace the timing belt at the recommended service intervals.

The cost of replacing the timing belt will vary from one car to another.

If you have a car with a small engine, the cost will be lower than a large GMC Yukon.

For the timing chain, you don’t need to replace it unless it develops a problem.

Although the timing chain is very durable, it isn’t resistant to mechanical failure.

The cost of replacing the timing chain is significantly higher compared to the belt.

The timing belt or chain are vital parts of your GMC Yukon.

With proper maintenance, you will experience fewer issues with your timing belt or chain.

But when a problem occurs, the outcomes are not so good.

To avoid timing problems, have your engine often serviced and the oil changes at the recommended intervals.

Replace the belt at regular intervals, and if you buy a second-hand vehicle, have a mechanic check the timing components.

When well maintained, the timing belt or chain will serve you long enough.