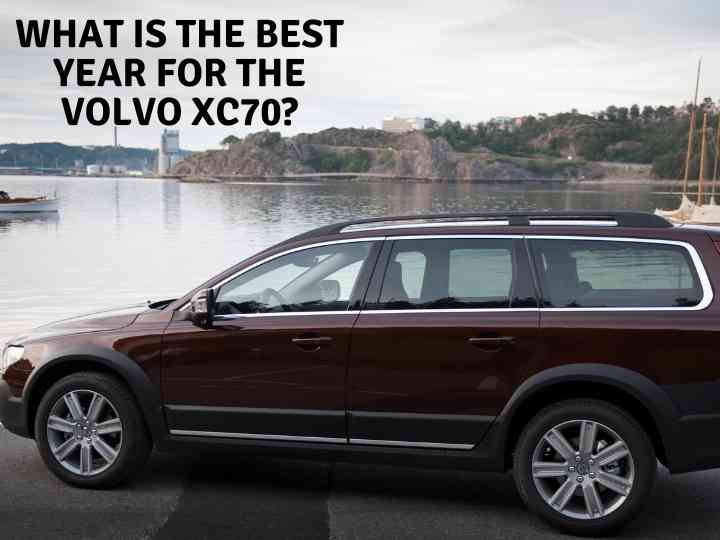 Volvos are known as practical, safe automobiles with above-average looks.

The Swedish automobile company has earned this reputation over the years with its various models, including one of their most popular cars, the XC70.

What Is the Best Year for the Volvo XC70?

While considering the best years for Volvo’s XC70’s, models made between 2004-2007 are your best bet. These model years remain popular by Volvo enthusiasts and casual car owners due to their quality, performance, and safety. On the other end, you will find that the 2001-2003 XC70s will be the most problematic years that the model was made.

Whether you shop in person or from Carmax or Carvana, your eye is bound to be caught by a Volvo model at some point.

The XC70, their luxury wagon produced from 1996-2016, was ruggedly designed with an all-wheel drive.

It featured luxury interiors and didn’t look bad when tearing through rough terrain or simply cruising down the highway.

Let’s look at the XC70 over the years to determine which years were the best and which years to steer clear of.

Best Years for the Volvo XC70

The XC70 kicked off the new XC line from Volvo in 1996, debuting the brand’s new safety improvements, such as Volvo’s whiplash and side-impact protection systems.

It also had accessories, including a picnic table, surfboard or ski holders, and a refrigerator that could be installed in the rear.

A lighter body allowed for better (yet still not great) fuel economy while still maintaining the traditional Volvo look of a 5-speed automatic transmission.

During those years, the XC70 was best-reviewed when Volvo introduced an updated version of the durable wagon.

New bi-xenon headlights were added, as well as a re-engineered steering system.

It also came with side airbags in the front seats, head curtain airbags for the front and the rear seats, ISO-FIX child-seat attachment points, and WHIPS, a new anti-whiplash protection technology.

The 2004 model had higher ground clearance than any other wagon on the road at the time.

This allowed for the vehicle continued trekking through heavy-weather terrains and off-road capabilities.

The following years of 2008-2016 were rated decently as well, though not quite as high compared to other vehicles on the road during that time.

What Are the Worst Years for the Volvo XC70?

Is the Volvo XC70 Reliable?

The XC70, and Volvo in general, have had a reputation for being unreliable in the past. This was a big part of the reason that the XC70 was discontinued.

One of these primary reasons it was discontinued (despite Volvo’s attempts to beef up the technology packages with Bluetooth, WiFi, proximity keyless entry, and satellite radio) was the model’s low predicted reliability rating compared to competitors, such as Subaru and Volkswagen.

Another consideration with the Volvo XC70 is that servicing costs tend to match those of luxury brands, such as Mercedes and BMW.

If you are looking for overall better quality, the Subaru Outback might be worth looking at for your needs.

Which Volvo Engine Is the Most Reliable?

Whatcar.com ranked the 2.4 D5 SE Lux as the best edition of the XC70 based on the diesel design, usability, amount of models available with the engine, and four-wheel drive option.

Doug Speck, President and CEO of Volvo Cars of North America, had this to say of the T6 engine: “The S60’s T6 engine is simply the best engine Volvo’s ever produced. It’s powerful, smooth, and gets great fuel economy.”

What Replaced the XC70?

After its discontinuation in 2016, the XC70 was replaced by Volvo’s XC90. The XC90 is larger, has better fuel economy, and offers multiple 4-cylinder engines (including a hybrid option).

The XC90 was rated as Volvo’s most reliable SUV on the road. JD Power assessed its reliability at 71/100.

This is still only average compared to other SUVs on the road, like the BMW X4 or the Lexus LX, yet for Volvo, this is an improvement.

Overall, JD Power rated the XC90 an 8.4 out of 10, which is a high rating, and this is made up for by its other features that will be covered in the following section.

It also includes enhanced safety features, as Volvo is known for. These include:

The 2022 XC90 has drawbacks as well. These include bad fuel economy and troublesome touchscreen.

Car and Driver reported that the XC90 gas engines make crude noises, and the ride when on bumpy roads produces an uncomfortable experience.

As direct competitors of the Volvo XC70, the Subaru Outback, Audi A6, and Volkswagen Golf Alltrack are worth looking at as well.

They offer similar functions, as well as unique stylings that might be right for you.

Though the Volvo XC90 has updated its iconic Scandinavian design, the predicted reliability rating is still a factor.

But if you are shopping for a family-sized vehicle with all-wheel drive, fashionability, and above all else, safety, the Volvo XC70 still might very well be the vehicle for you.