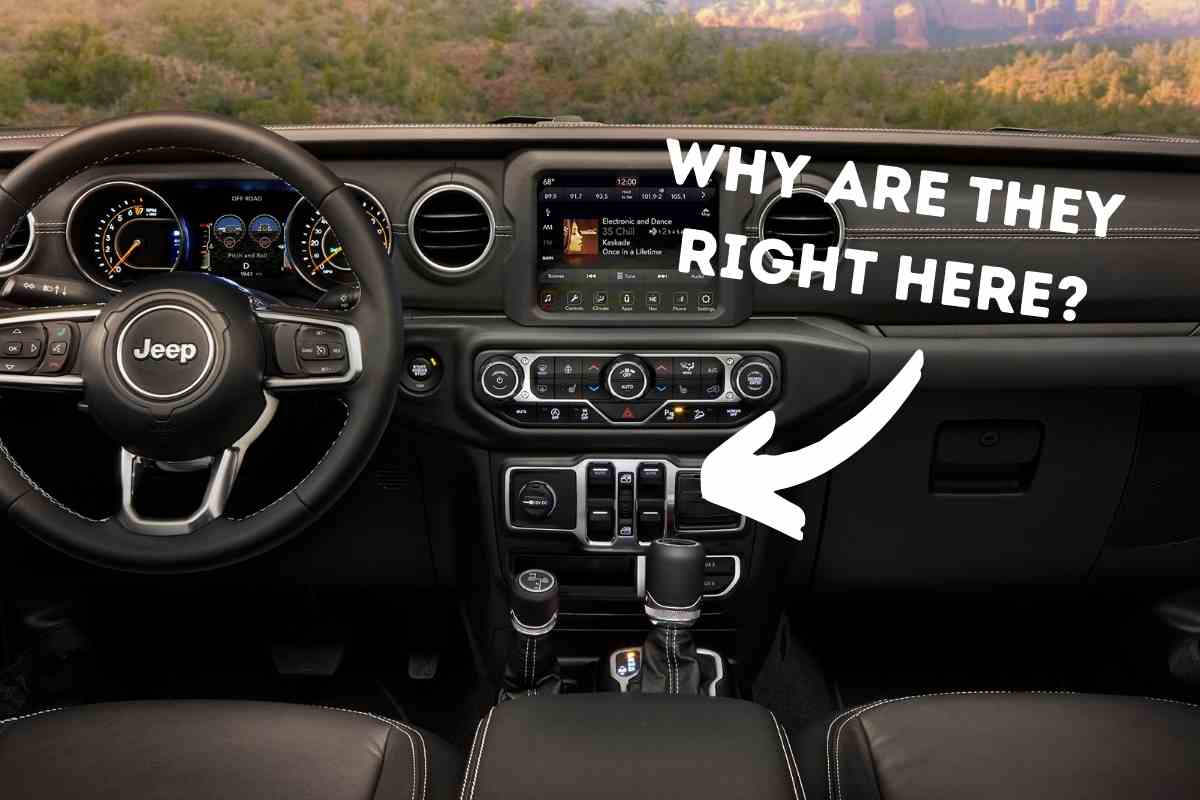 Have you ever wondered why Jeep Wrangler window control buttons are in the middle of the vehicle versus on the door panel like most other vehicles?

Placing the electric control switches for power windows in the middle of the Jeep started with the Jeep Wrangler JK model. The very first Jeeps were made without doors when used by the military. When they became civilian Jeeps they transitioned to fabric doors and metal doors. Most of these had zipper vinyl windows as part of the soft top package.

As Jeep models progressed from CJs to YJs Jeep offered half doors with soft top upper doors and full doors with roll up windows.

The Jeep Wrangler TJ (1997 to 2006) never offered powered windows. It was the last Jeep Wrangler model without the option of electric windows.

Today, it seems odd to think of a vehicle without electric windows. I own both a 1993 YJ and a 2006 LJ. The YJ has zipper windows with half doors and the LJ has full doors with manual roll up/down windows.

I love seeing my kids get into the Jeep and try to figure out how the windows work. They absolutely love the roll-up windows in the LJ. As a driver, the YJs and LJs were such narrow vehicles it was never an issue to simply lean over and roll down the passenger side window when you want so fresh air.

Plus, much of the time, I just leave the top and doors off anyway.

If you just bought at Jeep and are thinking about removing the doors, you need to know what is legal in your state.

Be sure to check out our article about what states you can legally drive with your Jeep Wrangler doors removed!

Do the windows go down in a Jeep Wrangler?

Jeep CJ, YJ, TJ and LJ models (2006 and older) all had manual windows. Some had zipper windows that you would unzip and fold down the vinyl window or if you had the full doors you would have a manual crank to roll the window down or up.

How do I lower my jeep windows?

To lower your Jeep Wrangler Windows, look in the center of the dash and look for two (2 door) or four (four door) control tabs in a cluster. This is where you will find the control switches to lower your Jeep windows.

Do all Jeep Wranglers have roll up windows?

Not all Jeep Wranglers have roll up windows. If you own a Jeep Wrangler that is a 2006 or older and you have half doors, your Jeep would come with zipper windows. This means you would unzip your window which is made out of clear vinyl and you would fold it down into the Jeep to open your window.

All modern Jeeps or old Jeeps with full doors do have roll up windows. To get roll-up windows in a YJ, TJ, or LJ you would need full doors that came with the factory hardtop package.

Why do Jeep owners remove their doors?

With the return of the Ford Bronco, Ford is introducing another vehicle to the market that offers removable doors.

Can you roll jeep windows down with key fob?

Which Jeep Wrangler has power windows?

Can you take the doors off of all Jeeps?

Not all Jeeps offer the ability to take the doors off. Remember, Jeep is a brand of many vehicles. You can take the doors off of a Jeep Wrangler, Wrangler Unlimited and the Gladiator truck. Other models do not offer removable doors.

link to Which Kia SUV Is Most Reliable?

Kia has for many years had the reputation for the manufacture of reliable vehicles.  This cuts across all their models and body styles. The most sought-after of Kia models are Kia...

Continue Reading
link to Which GMC SUV Is the Most Reliable?

GMC is well-known for the design and manufacture of top-of-the-line vehicles.  The GMC lineup of SUVs (Sport Utility Vehicles) is popular for its versatility, performance, and stylish...