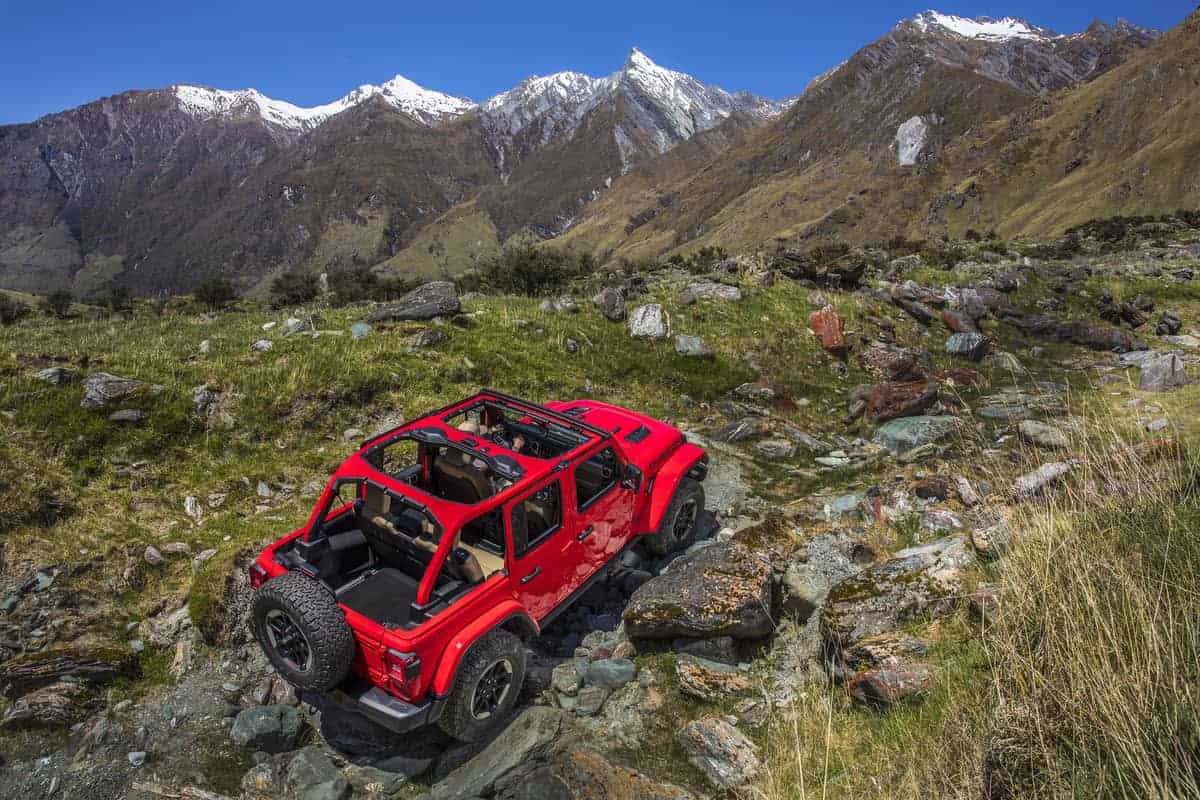 The Jeep Wrangler Rubicon – it is a beast of a machine and a beautiful multi-use vehicle that can be driven on the street as well as hitting some moderately difficult trails for rock crawling and whatnot. This, it pulls off decently, thanks to its lockers.

Like other Jeeps and many 4X4s with a selectable or manual locker, the Wrangler Rubicon performs better when it is actuated as you maneuver a difficult terrain.

But what sets it apart from what other differentials that other vehicles incorporate? And are Rubicon lockers air or electric?

What Kind of Locker is in a Rubicon?

Unless you have a Rubicon, chances are you have open differentials in your Jeep Wrangler. Rubicon comes with standard, selectable electronic lockers, suitable for drivers that need on-demand traction. To be precise, they come with Tru-Lok differentials for both the front and rear axles.

Along with other capabilities, the Rubicon is Jeep Wrangler’s most adept model for going off the trails. Most of its features are dedicated to off-road performance, thanks to its differentials that help distribute power equally to the wheels when crawling over rocks or traversing uneven grounds. And because the Rubicon is the only one that comes with Electronic Front Sway Bar Disconnect, which is a savior on harsh trails, you can easily disconnect them remotely to improve suspension when the ride becomes uncomfortable

Surprisingly, these Jeep off-roaders have decent on-road manners as well. They make easy turns and corners much like they were meant solely for that kind of activity.

These capabilities are all thanks to the vehicle’s unique lockers.

To manage traction, most modern vehicles come with enhanced capabilities such as limited-slip differentials and traction control systems, but these terms should not be taken in the same context as full differential lockers.

Differential lockers distribute power equally to the two wheels on an axle when they are engaged. Power on both wheels will remain constant regardless of the resistance each one receives. This way, the vehicle maintains full traction as long as the locker is engaged.

For the ins and outs of the Rubicon lockers, let’s understand the different types of lockers Jeeps have.

This is the stock differential option available for most Wranglers. The setup includes gearboxes aimed at allowing one wheel to spin faster or slower than the other when turning a corner. This is handy as it prevents your wheels from being strained and stressed to wear out faster, and causing your tires to lose even more traction.

This differential is applied when you make a turn and the outside wheel of your Jeep, as with any other type of vehicle with an open differential, will want to run faster to cover more distance than the inside wheels. It works best when both wheels have the same traction, otherwise, when you are stuck or driving off-road and one wheel gets more traction than the other, it won’t give you the required momentum.

Jeep Wrangler’s limited-slip differentials are not open or locked, but it combines the capabilities of both. They are not common on Wranglers and are mainly sold as an after-market upgrade.

This type of differential works mostly the same way an open differential does practically. But they are better at providing better torque to wheels when making turns in snow, muddy, or rough surfaces.

A Jeep Wrangler locker functions the same way a differential lock on any other 4×4 would. It locks both wheels on the same axle to ensure that they spin at the same rate and with the same amount of torque. Lockers are what allow Jeeps to crawl. They should not be used on-road because they are meant for drag racing or extreme off-roading.

There are two types of Jeep lockers, automatic and selectable. The main difference between the two is in their driving characteristics. An automatic locker will release once it has served its purpose, that is after you release the throttle, but a selectable locker will remain engaged up until you manually deactivate it. The difference might not seem like much, but it makes a lot of difference when you are driving a tight road, a steep slope, or a snowy track.

What about Rubicon Lockers?

The Jeep Wrangler Rubicon is the only Jeep that comes from the factory with default lockers and axles, both the front and rear. It is equipped with the Dana 44 generation of axles. Now, don’t get too excited, the new generation of Dana 44 I’m talking about might not be the one you knew.

Dana 44 axles are beefier and all Wrangler models today carry them with a gear ratio of 3.21 or 3.73. Rubicon models, however, come with a standard 4.10 gear ratio, but at the front, they can use either the 3.73 or the 4.10. The size of the gear ring in a Dana 44 axle is 8.5 inches while the width of the axle is 1.31 inches. Coupled with the equipped locker, the Rubicon provides an amazing experience even when the vehicle loses traction.

Notably, some of the Dana 44s have been redesigned to become thicker for some Rubicon. This axle is referred to by Jeep as Supa Dana 44.

Now, for better traction control and torque distribution, Rubicon employs Jeep’s Tru-Lok differential. This differential is also known as an electronic differential lock (EDL) and is manufactured by the Driveline Torque Technology division of GKN. That should answer the question; are Rubicon lockers air or electric? Yes, they are electric.

In a Dana 44 Spicer model for the front and rear axles, this EDL has been designed to withstand multiple shock loads, and respond in under 0.5 seconds even under extreme temperatures.

Unlike some other electronic lockers, the Rubicon locker can activate regardless of the vehicle speed, including differences of more than 200 RPM. It stays locked during the cycles and improves the impacts of the driveline, giving you more control. It doesn’t need any fluid additives to keep it functioning optimally.

The GKN ELD works in the same principle as that of an Eaton E-Locker differential, which operates electromagnetically. It is activated from a switch mounted on your Jeep’s dash. This bolts the differential center through a positive mechanical lock.

When disengaged, it leaves your Rubicon running on an open differential for easy driving on the road, but when it is engaged, it gives your vehicle a solid drive by meshing its precision-forged gears.

The activation of the switch supplies current to an electromagnet that produces torque on a drag plate. As a result, a ramping system is turned on, and the locking mechanism is engaged. After accomplishing the needed, and once you deactivate it from the dashboard switch of your Jeep, the locked diff will be disengaged.

How Do Jeep’s Electric Lockers Compare to Air Lockers?

The whole idea of fooling around with the compressor doesn’t sit well with some people, and they would just go for an e-locker. Although with a Rubicon locker, they don’t really have a choice since the vehicle comes with one type of locker, electric.

But it makes sense to worry since electromagnetic lockers are more reliable because they are fairly simple. The only quibble among some people is that after engaging it, they might end up backing it up several times to get the locker to activate. Well, that’s a bummer, especially for persons doing some off-roading, and it would be so, for any other type of vehicle using such a system and not the Rubicon. One other drawback about electric lockers on your jeep is that they are expensive.

Air compressors, on the other hand, are preferred by some people because of the immediate satisfaction they feel after the system kicks in place just in time as expected. But to enjoy this, you need a few more upgrades or additions than the e-locker. An air compressor for instance. A good number of people run ARB compressors, which may offer a dual system also.

On the flip side, air lockers can be fragile. With their complex nature, you risk damaging the air line. They also feel a lot more expensive, especially if they did not come pre-installed in your vehicle, but they may well work for you. In the end, it all depends on what you prefer.

Jeep lockers are highly useful in going off-roads, tough terrains, including the rocky and sandy types. You can use it as a recovery vehicle to pull others from muddy or slippery surfaces. While rock crawling, expect some changes in traction due to the different angles of turns you will be forced to make and the protruding rocks, and it is possible to get the wrong wheel spinning. Your wheel may also be lifted off the ground if your Rubicon doesn’t have sufficient articulation as you crawl the rocks. In such cases, lockers will give you the traction you need when you need it, whether you are off-road or just helping a friend in his car get unstuck from a ditch.

When Should You Use Jeep Lockers

By all means, use your locker to get out of every sticky situation. But don’t use it on-road. However, if you engage the lockers and your vehicle begins to rapidly spin tires, is bouncing, and swaying a lot, then you risk breaking your axle.

Just remember that lockers are awesome little saviors, but if you misunderstand their function, or misuse them, it will cost you a lot. The more you’re careless, the more you strain the axles, vehicle control mechanisms, and drivetrain. But I’ll say it’s worth it!

Owning a Jeep Wrangler Rubicon is probably the best thing that could ever happen to you. It offers a thrilling off-roading experience plus you can use it on open roads. And if you’ve always wondered what type of differential lockers it had, well then, I hope this article has been of help.

Only remember that the differentials that come with a Rubicon are different from that of many other 4X4s out there, as discussed. It has a robust axle configuration and runs an electric selectable locker. These two alone make it a worthy vehicle.

That said, here is an article about whether all Jeeps have differential lockers that will add more information.